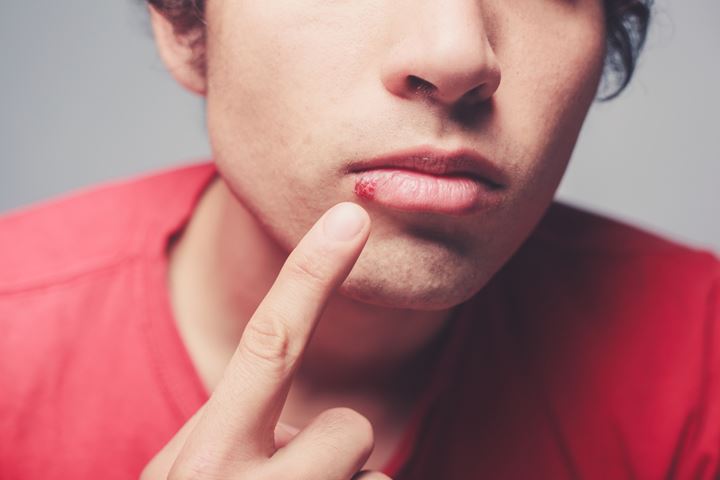 Don’t you just hate those little fever blisters on your lips that emerge about 2-3 times a year? You don’t remember when the fever blisters first emerged, and you can hardly tell when they are going to emerge next. You only feel a little burning one or maybe two days before it becomes visible, but you usually don’t attribute it to cold sores symptoms. They are popularly known as cold sores because people attribute their emergence to catching a cold. But the fact of the matter is that cold sores symptoms show when one contracts an infection. Worse yet, it is there to stay. So far there has not been found a cure to rid of it. Yes, cold sores can be treated, but that which causes it, the herpes virus, cannot. It lives in the human body, and can only be treated temporarily, but then in time it appears again triggered by cold, lowered immunity, and other diseases. But don’t feel alone- this herpes virus is found in about 90% of the population of the planet. Most of the time it’s passive, hence it does not always pop out on the lips; it’s waiting for the immune system to lower its guard, and then it will make itself known.

Anything that weakens the immune system is potentially a trigger for the herpes virus, and consequently for fever blisters. Mechanical stimuli, such as kissing with those infected, drinking from the same bottle or cup or eating from the same plate as the herpes carrier, etc. can also cause the herpes infection. Can one prevent cold sores from emerging? In fact, it is much healthier for you and those around you, if fever blisters are spotted before they even have a chance to come to the surface. As for cold sores symptoms, pay attention to the following signs: facial tenseness, especially around the mouth, a painful sensation in the lip (where fever blisters are about to emerge) and light itching on the lips. If these cold sores symptoms are missed, next comes the following stage, accompanied by reddening and swelling of the lips, the appearance of red dots, which, if not treated on time, transform into densely-populated little bubbles containing transparent liquid. (Fever blisters should not be popped; otherwise this liquid released presents more danger to people around you, and it actually prevents from quicker healing). The final stage comes when these bubbles pop open on their own and dry out, covered with brownish tissue, which later falls off on its own.

First and foremost, take care of the immune system with physical exercise, a healthy diet, and a healthy lifestyle. Once your immune system is in good shape, cold sores symptoms are less likely to bother you. But if you contracted it and it appears every now and then, just wait it out. Cold sores symptoms will go away and so will the cold sores themselves. It’s only a matter of time. It takes ten days to two weeks to be free of these fever blisters. To accelerate the process, one may use anti-herpes ointments that are applied locally. Ultimately, there is not much one can do about cold sores.